Savage Worlds brings the fun to your gaming, but did you realize we can bring pizzazz to your torso and table, too?

We put the game in your hand, now let us put the shirt on your back! Get ready for the 2013 convention season with one of our four different Savage Worlds t-shirts. For the true gamer of leisure (or The Big Lebowski fan), the Savage Worlds bowling shirt is always a big hit. 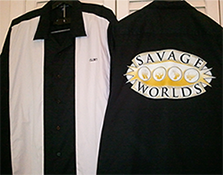 Or spice up your dice with one of the custom sets for Savage Worlds. Deadlands dice can help you through a West where the bones can roll themselves. Savage Worlds Wild Dice put that extra zing in every roll.

Hell on Earth in Hero Lab—Free! 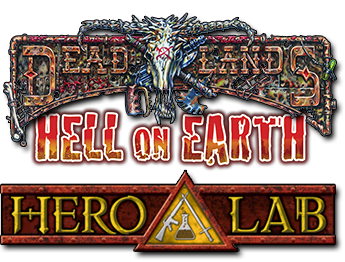 Hero Lab steps into the threatening glow of a discomforting future, adding free support for Hell on Earth. This is the fourth setting for Savage Worlds that Hero Lab has made available, joining Deadlands: Reloaded,  Rippers, and The Savage World of Solomon Kane.

Did we mention that all of those setting files are free downloads for award-winning software? That’s right, absolutely free.

So see what everyone’s talking about and make some spiffy characters of your own: check out Hero Lab for Savage Worlds today!

Be sure to keep an eye out. I hear you might see some other settings step out of the darkness into Hero Lab soon…

Every year, The Most Unread Blog on the Internet Ever features Tommy’s Top Six, his selection of the top six stand-out books of the year. Savage Worlds Deluxe: Explorer’s Edition made the cut for 2012!

While you’re checking out the article and the other top five honorees, be sure to help them celebrate their third anniversary on the web by entering their giveaway contest. That’s right, it’s The Most Unread Blog’s birthday, but they’re giving you the presents! Gifts include selections from all the top six publishers as well as Fabled Environments, so you know there’s some good stuff waiting for you to win it!

If you want the sure thing, you can buy a copy of Savage Worlds Deluxe: Explorer’s Edition right now in PDF at the Pinnacle PDF Store or in print from the Studio 2 Publishing web store. Both are still just $9.99!

Happy New Year from All of Us at Pinnacle! 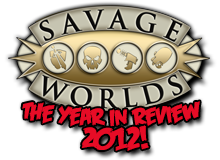 It’s been a big year here at Pinnacle, and we’ve been very happy to have you be such a big part of that!

Old friends returned to us in 2012. 50 Fathoms: Explorer’s Edition brought one our earliest settings to a new generation of Savage Worlds fans, rules, and format! The ghost rock bombs rained again with the release of Hell on Earth: Reloaded, updating the dark future of Deadlands with a new hardback core rule book. Prerelease copies sold out almost immediately, but we’re expecting the full supply for an early 2013 treat!

We also had our first Kickstarter campaign—Deadlands Noir—which was wildly successful! We weren’t sure you’d want a non-Western Deadlands, but now we know! Some of the PDFs are available now, others are coming soon, and the whole initial line will be delivered in 2013.

The Savage Worlds miniatures line continued to expand. Our publishing services partner, Studio 2 Printing, even ran a Hell on Earth minis Kickstarter campaign to help speed up 2013’s minis for the Wasted West!

The Deadlands line kept coming on strong in 2012 with several adventures, a Plot Point Campaign, minis, and custom maps. Be sure to check out Deadlands products on the Pinnacle PDF Store and at Studio 2 Publishing for the full low-down, but here’s the quick list:

And, perhaps most importantly of all, 2012 gave us more of you! Getting to see our fans and supporters at conventions and to talk with you on the Pinnacle Forum (which may be one of the most pleasant places the internet has to offer) continues to be one of the very best parts of our jobs!

Last year was great, and we expect 2013 to be even better! Get ready, and get gaming!

Clint and Jodi Black Talk with The Goblin Beat 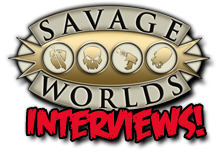 The Goblin Beat talked with our own Clint and Jodi Black. If you’re curious about the origins of Savage Worlds, how to get into editing, Beautiful Brains Books & Games newly-licensed free adventure Throwdown at the North Pole, the difference between nonprofits and game companies, or how to win some free stuff, be sure to listen to the interview!

Oh, I did say “win some free stuff,” didn’t I? Yep, if you comment on the interview, you’ll be registered to win a copy of the upcoming printing of Necessary Evil: Explorer’s Edition signed by Clint and Jodi themselves! Don’t let this chance slip you by.

Come to Jalizar, the Rotten Flower of the North, and learn the seedy ways of the Thieves’ Guild. Smuggle goods into the city and fool the Copper Helms (the corrupt city watch of Jalizar), vie for power with the Merchant Houses, or if you are really bold, venture into the dark Sewers of Jalizar where an age-old evil lurks undisturbed.

Twenty new Edges, new trappings and tweaks for the arcane backgrounds, an additional list of gear, and much more await you in this book! Sharpen your dagger, put on your black cloak, and lose yourself in the dark alleys of the City of Thieves! 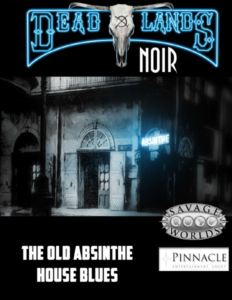 Now that you’ve had your mitts on Deadlands Noir for a week, do you find yourself hungry for more? Well, the Great Depression can do that to a body, but we’ve got the fix for you.

The Old Absinthe House Blues, the first adventure for Deadlands Noir, is now available from the Pinnacle PDF Store.

The life and music drain out of the Old Absinthe House when their hot new blues singer goes missing, and the owner turns to you for help. Can you find the missing dame with the velvet voice, or will the mystery remain as murky as the bayous and darkness that shroud the Big Easy? When the goin’ gets tough, is the promise of a big bar tab enough to keep you goin’? 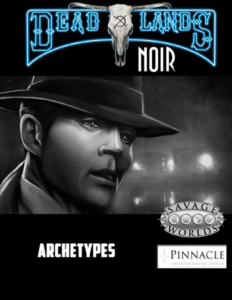 No adventure or setting is complete without good characters. In the spirit of the season and to make sure you’re off to as good a start as you can get in dark times, we’re giving you Deadlands Noir Archetypes for free! Use these nine fully-finished characters as they are or let them serve as guiding examples for your own creation.

We’ve given you the time and the place—even the action with The Old Absinthe House Blues—now it’s time for your characters to run with the story!

Giving You the Gift of Giving! 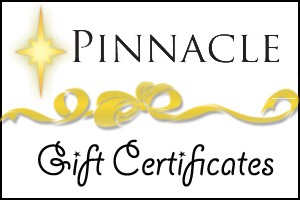 Do you know someone with a new tablet with no content? Do you need a really last-minute gift? Are you so swept up in the spirit of giving that you just can’t stop? Do you have birthday presents or other gifts that you need soon for your gamer friends?

We’ve got you covered with our new gift certificates for the Pinnacle PDF Store. With a few clicks, you open a wide world of fun and adventure for that lucky someone. You don’t have to worry about finding the right size, either—you set the amount each time you buy one! 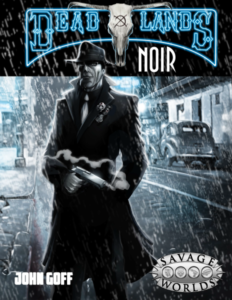 New Orleans, 1935. The Depression makes each day uncertain, like a moral compass in hard times, and times have never been harder. The constant rain beats folks down like a fixed fight, and every schmuck with an ounce of authority, from your local beat cop to his honor the mayor himself, is as rotten as an old bag of apples sunk in the bayou.

Worst of all, things lurk in the shadows, and when life gets as dark as the waters of the Mississipi, some mooks get stupid enough to think conjuring them out of the shadows might just make things better.

And that’s when some sharp shamus, grizzled grifter, prizefighting palooka, or dangerous dame has to step in and let them know that no matter how bad things get, there are still a few hardboiled heroes ready to face monsters in the night.

Deadlands Noir—a pen-and-paper roleplaying game set in the world of Pinnacle Entertainment’s award-winning Deadlands universe—is now available to everyone, not just our Kickstarter backers. It includes new Edges, Hindrances, and powers, as well as new rules for handling detective work, the state of the Union and the CSA in the Depression era, a complete Plot Point campaign, and of course, more monsters and ghouls than you can shake a smoking .45 automatic at.

You can get the Deadlands Noir PDF format from us directly, from Studio 2 Publishing, or at DriveThruRPG. Our fulfillment partners at Studio 2 Publishing are also taking preorders for the printed book and have the Print-PDF Preorder Bundle available. The bundle gets you the PDF immediately, the printed book as soon as it’s available, and a price break—and with the world today, what palooka don’t need a price break!

As you settle in to your homes tonight, know that things will never be quite the same. The darkness—somehow different and less caring—brings Deadlands Noir with it!

That’s right, mon ami, the Deadlands Noir PDF will be released to backers of the Kickstarter project when the evening falls tonight. If you are not a member of those lucky few, fear not—the PDF and preorders will be available to everyone next Tuesday.

For the most recent news on the project, check out the Deadlands Noir Kickstarter Updates. If you want some other palooka’s take, visit UK Roleplayers for what could be the first review of Deadlands Noir.

And, for your own safety, frer, keep your eyes on the shadows…