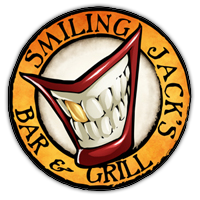 Take a break and listen to the crew as they cover something for everyone!

Like the theme song says, pull up a stump and hang out at Smiling Jack’s today.

A Frightfully Good Deal on the Horror Companion! 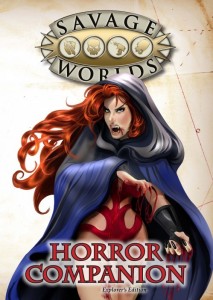 Celebrate the spooky season with your own Savage Worlds Horror Companion Bundle! With this fantastic sale, you can have madness in multiple media—the Horror Companion will be yours in both PDF and print at the same low price as just the printed version until Halloween!

Get the Savage Worlds Horror Companion Bundle today and rest easy with immediate access to all the eldritch secrets through immediate PDF download! Play as the monsters of myth, use ritual magic, and customize your worlds of terror with several new Setting Rules.

Get the Savage Worlds Horror Companion Bundle today and spend sleepless nights knowing that such a terrible tome is coming ever closer to your home, soon to place itself in print in your very hands! Refer endlessly to new spells, rules for your quickly-lapsing sanity, and an expanded list of Edges and Hindrances that might help you survive in a world gone mad.

Get the Savage Worlds Horror Companion Bundle today and avoid the bitter regret and self-loathing that will come to so many when the sale ends at the stroke of midnight on Halloween! If you want to run a dark setting of any sort, this is an opportunity not to be missed.

Don’t be left alone in the cold, dark dread of the night this Halloween season—get a Companion today!

Openly Gamer Theater has released its first full episode of Tower of the Ape, their actual play podcast in the Conan setting. Get swept away in the adventure and see how the fine folks at Gamerstable are using Savage Worlds to bring this iconic swords-and-sorcery setting to life!

Be sure to listen to the three character introduction prequels for the full effect!

Editor’s Note: Conan is the property of Conan International. We claiming no ownership or licensing, and there’s no “Conan for Savage Worlds” book in the works. This is one group’s use of Savage Worlds to play a Conan-style game. Also, the episodes are tagged for potential explicit content.

Join the TimeGuard! As a highly-trained operative, it falls to you to fight time crimes along the millenium. Save the timeline from time thieves, chronoterrorists, and other incredible dangers.

GRAmel has made both the TimeZero Preview and the TimeZero Archetypes available as free downloads, so go check them out. After all, there’s no time like the present, and there’s no present like time! 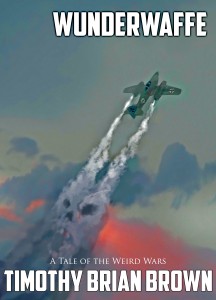 Every man dreams of flying and of being a hero. Oberleutnant Karl Schmidt dreams larger—of being the best pilot in the entire Luftwaffe.

What would such a driven man do for a shot at the Third Reich’s new superweapon, the ME-262? What of the strange amulet he wears on each flight…and the bizarre being some say flies beside him?

Wunderwaffe is the second Wendigo Tales contribution written by Timothy Brian Brown (yes, the Tim Brown of Dark Sun and Dragon Kings fame) and is set in the world of Weird Wars. It joins Los!, Teufelshunde, Hellfighter, No Man’s Land, With Utmost Dispatch, Without Fear, and Texter in our new (and still growing) line of e-fiction, Wendigo Tales.

Now’s the time to plan ahead for what may be the highest concentration of Pinnacle staffers in a very long time—MACE 2013! Don’t believe me? Here’s a list:

We’ll be all over the place, but especially at Savage Saturday Night! In honor of Savage Worlds’ tenth anniversary, MACE and Beautiful Brains Books & Games will be hosting a special “post-party” at midnight. I hear there’ll be cake, soda, laughter, reminiscing, and the ritual watching-Steve-fall-asleep—all things not to miss!

* I have no doubt she’ll tell me that should be “Force With Which to Be Reckoned”! 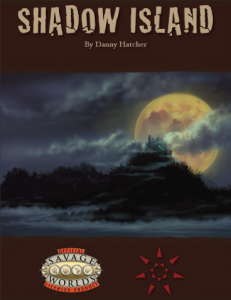 Our friends at the Goblin Beat have expanded their domain from podcasting and reviews to game publishing! Their first release, Shadow Island, is a Savage Worlds adventure for Seasoned characters in a fantasy setting.

Can your band of heroes defeat the evil that shrouds the coastal village of Glencrest? Can you break the foul bonds of necromancy chaining the village to a dark island estate? Will you bring hope or provide another example of the futility of resistance?

If you’re not the type to mind spoilers, the Goblin Beat even has a link to an actual play of a Shadow Island playtest!

Deadlands Noir Accessories for Everyone! 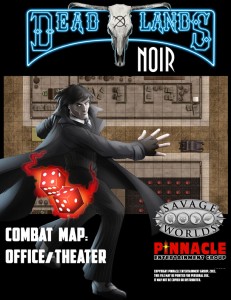 Have you been jealously eyeing the goodies your buddies got from the Deadlands Noir Kickstarter—or wishing you’d signed up for more stuff yourself? Then, my friend, your day is about to get brighter than a Hexaco dock fire! It takes three things to get along in these tough times— somewhere to be, something to do, and a whole lotta’ luck on your side—and they’re all available to the right Joe with a little scratch.

When it’s time to quit pounding the streets and go somewhere special, we’ve got what you need with new Deadlands Noir Combat Maps! From offices and theaters that could be anywhere in New Orleans to ramshackle cabins that could only be in the bayou, you’re all set! These 24″ x 32″ maps are foldable and ready to take on any style marker—dry-erase, wet-erase…even permanent—that you care to throw at ’em. If you’re the type who can never work with a paper map, PDFs are available, too!

When the action really starts, there’s no better way to track it in style than with the newly-available Deadlands Noir Action Deck! Get a double-pack of elegantly crafted cards from Cheyenne Wright, an artist with more Hugo awards than a two-fingered fella’ can count!

And when the chips are really down, there’s one more thing you need—more chips! Put Lady Luck on your side with the Deadlands Noir Bennies, and get 20 more chances with these casino-quality agen sbobet poker chips.

Don’t be in the dark, mon ami. Check out the whole line of Deadlands Noir goodies today! 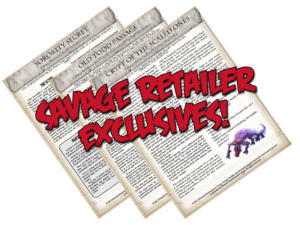 Would you like to see the Savage One-Sheet Crypt of the Scaled Ones? How about Death Worm, Old Todd Passage, or even Sinister Sorority Secret? They all come with characters, figure flats, and maps, and they’re all free!

The only way to get your paws on these goodies is to find them at an official Savage Retailer. Check the Savage Retailer page for the store nearest you.

If you don’t spot one, don’t lose heart. The Savage Retailer program is still very new, you can help spread the word by sending your local stores to the Savage Retailer Registration page, and you’ll probably need that heart for something important later!

If you’ve got any questions about the Savage Retailer program, shoot a note to our new Marketing Manager Jodi Black for more details! 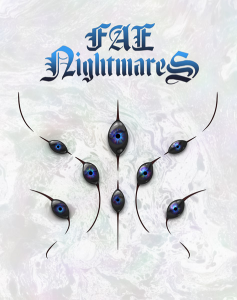 Enter a shadowy war between Fae Courts as you’re thrown headlong into a world of extremes and contradictions. Adapt to the new reality as you change into something both less and more than human—or die trying!

Fae Nightmares is a modern urban fantasy setting for Savage Worlds from Dark Smile Games. In addition to your classic Celtic Fae, the game is flavored with a dash of North America—from Native American legends to urban myths to lumberjack tall tales.

Be sure to check out the Fae Nightmares Kickstarter project today and fill those dimly-lit corners of your town with even darker dreams!