Keeping Deadlands Past Alive in the New Year

We know you’re out there, and there’s no shame in it. Whether you’re a completist, a romantic, or just have a preference,* we know some of you prefer Deadlands Classic or even Deadlands d20.

For those of you who don’t want to mix your flavors of the Weird West, don’t worry, amigo! All the new Deadlands materials are in their own Deadlands: Reloaded section! We’re trying to make it as easy as possible for you to get the Deadlands you want, whatever kind that might be.

*Not that there’s anything wrong with that…

As one year turns into the next, it’s human nature to reflect on the past and look to the future. As all of us here at Pinnacle are only human,* how could we do any differently?

Last year was filled with excitement, both big and small. It was our first full year with Shane back at the helm full-time, and we “upgraded” Jodi Black from Editor to Licensing and Social Media Manager (and Editor**). Our first Kickstarted products (Deadlands Noir) made it into the real world, and our second Kickstarter (Weird Wars Rome) was wildly successful! We released a slew of new products, attended a lot of conventions, started the new line of fiction with Wendigo Tales, expanded the Pinnacle Web Store, and had a great year thanks to all of you!

Ours wasn’t the only good year, either! The Savage Worlds licensees released a wide variety of well-received materials, both with new settings and expansions to old favorites, by traditional means and by several successful Kickstarters. It’s exciting to see what other people do with the Savage Worlds system and to see you give them your enthusiastic support as well.

What does 2014 hold for us? You already know about the Science Fiction Companion and Super Powers Companion (2nd Ed.) releasing for preorder in January. Some of you have already heard of our sci-fi setting Last Parsec. You can also expect more for Deadlands: Reloaded (including the next of the big four Plot Point Campaigns) and Deadlands: Hell On Earth (including the Hell on Earth Companion)! And if you don’t think we’re keeping a few more surprises up our sleeve—including ETU: Degrees of Horror—than you just don’t know us very well…

Thanks again for the great 2013, and stick with us for the even better 2014 coming next!

* No, really. It’s absolutely true. I don’t understand why I have to keep defending this claim. Have you ever seen a more human-looking bunch?

** It’s sort of like the mafia or Hotel California. You can’t ever really get out of editing. Ever. 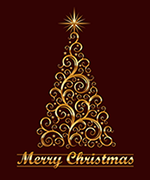 To all of you from all of us, we wish you the merriest of Christmases and the happiest of holidays. We hope you are in the pleasant company of friends and family, that merriment tugs your mouth into a smile of delight, and that your heart is warmed by joy. Considering how much enthusiasm you bring to us throughout the year, we could hope for nothing less for you!

SciFi and Super Powers Companions for the New Year 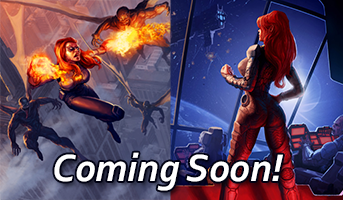 The SciFi and Super Powers Companions (Second Edition) will both debut January 14, 2014. You’ll be able to buy the PDF for immediate gratification, preorder the printed books for your reading pleasure, or get a combo pack for the best of both worlds!

The much-anticipated SciFi Companion is in final proofing right now. From the very personal (cyberware, races, Edges, and Hindrances) to the very large-scale (world creation, ships, and vehicles) and everything in between (power armor, robots, weapons, and gear), it’s in there—plus guidelines for creating your own! Shape the future to your whims with the SciFi Companion!

The new edition of the Super Powers Companion is also coming at you! The original printing has been sold out for a while, and Shane, Clint, Norm Hensley, and the gang have been hard at work applying eight years of feedback and playtesting to create the new edition. Shane says, “We’ve really streamlined things and brought all the rules more in line with some of the changes we’ve made in Deluxe. The best part is since we worked on SciFi and Supers at the same time, we were able to better standardize things between the two books…from races to powers to gear.”

Whether you’re looking to fly across the galaxy or just over the nearest tall building (or maybe even combine the two), January 14 is going to be a big day for you! 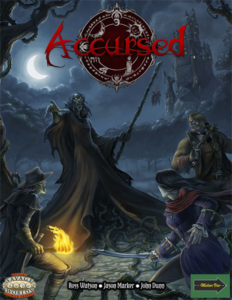 You are the Accursed, monsters made from ordinary men and women by the cruel magic of the Witches of the Grand Coven. The world rejoices with the end of their reign, with the downfall of the Grand Coven, and that light may once again prevail.

But not for you. You remain a monster, unwelcome, unwanted, unable to return to your home, and haunted by what you have done in service to evil.

The light, however, is not as strong as all have hoped, and darkness is ascendant again. Only forms as horrible, twisted, and powerful as your own can stand against it. Can you save a world that spurns you, a world you once struggled to enslave or destroy?

Find redemption, and perhaps a cure, in Melior Via’s Accursed. Both the full setting and the Player’s Guide are available now in PDF.

Family is an integral part of the holidays, and our Savage Worlds licensees are our family. While they’ve been up to a lot this year, definitely worthy of a family letter, here’s some of their most recent activities:

Be sure to check ’em out!

The Case of the Jumbo Shrimp Available for Deadlands Noir 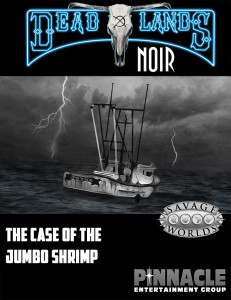 The Crescent City is a mecca for bottom-feeders, a place where big trouble can rise from the smallest of things. So it is with The Case of the Jumbo Shrimp, an adventure for Deadlands Noir.

Things start out small—and simple—enough. Soon, your missing person’s case involves murder, magic, and mayhem. Soon, it becomes a diabolical tale of corrupt politicians, the Black Hand, and deep secrets as old as the Big Easy itself!

Don’t be a Prawn of Fate. With this 46-page full-length adventure written by Jason Mical and John Goff, take charge of the destiny of a handful of very unlucky palookas today!

Have a Happy Holiday Game! 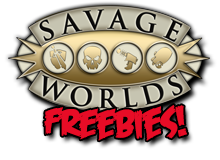 Give the gift of gaming with a holiday-themed Savage Worlds game night! The Nutcrackers, Winter Break, and Silent Night, Hungry Night are all ready-to-go holiday adventures on our Savage Worlds One Sheets page.

While you’re at it, be sure to check out our full line of other Savage Worlds Downloads, all available at the same low price—absolutely free—for your downloadable enjoyment! Have an adventure or two on us, for the season or whenever your want!

You expect to find a lot of things in Deadlands Noir—murder, intrigue, greed, despair—but a festival of lights? That’s right, Hanukkah comes to the grimy streets of the Big Easy, and this year it’s been captured for your amusement!

The fine folks at One Shot podcast are releasing Eight Nights of Murder, their actual play podcast of Deadlands Noir. Follow along for a few weeks as One Shot walks you through a desperate city in a darker world of dire plots, and all you’ve got to do is listen.

But listen closely. You might be lucky with the dreidel, my friend, but the stakes are considerably higher than some chocolate gelt!

TAG’s Land of Fire Expands into the Southern Oceans! 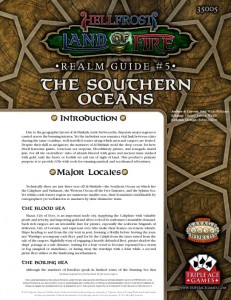 The turbulent coastal seas are a vital part of Al-Shirkuh’s trading and travel routes, linking all coastal cities in one vast maritime web. Ferry men, cargo, or anything you can dream of along the briny highways.

If you’re brave enough, take to the open ocean. While it’s generally avoided—with the fearsome giants, sea serpents, pirates, renegade djinn, and immense likelihood of death—the storyteller’s lures of islands littered with gems, ancient ruins stacked with golds, and lost magic undreamed of by modern man have sent more than one adventuresome sort into the glittering blue-green unknown!

Weigh anchor, hoist the sails, and follow in the Sinbad’s “sailsteps” with