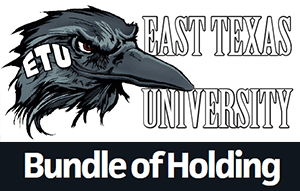 College is scary. Going to East Texas University is downright terrifying, but at least you can do it on the cheap if you sign up now!

In cooperation with the fine folks at Bundle of Holding, you can get the ETU Bundle of Holding for only $9.99. That gets you the Student Collection, with full PDF copies of East Texas University, Savage Worlds Deluxe, ETU Archetypes, Trouble in Texas, and the ETU Welcome Kit. That’s a $43 value right there, and you don’t need a degree to figure out that’s a great deal, partner!

It’s worth your while to chip a little more into the kitty, too. We won’t be naming a college or building after you, but you can step on up to the Dean’s Collection and add in Degrees of Horror, Class Ring, ETU Figure Flats, ETU Maps, the University Press Kit, and GM Screen Inserts! That’s an additional $59 value, for a total of over $100 worth of ETU greatness.

Here’s where we mix in a little Econ and Psych into that Math we’ve been giving you. You definitely save a bundle, but you may also save a child. A portion of all proceeds from the ETU Bundle of Holding go to the National Center for Missing and Exploited Children. Do a good thing, help others, and keep some cash for yourself while you’re at it!

Don’t wait too long—the ETU Bundle of Holding semester only lasts until Monday, May 15! After that, it’s only memories.

Watch as our own Shane Hensley unboxes some of the first painted production models for Conan: Rise of Monsters. Seriously, folks, you have to see these bad boys to believe ’em.

Keep watching, too, because Conan: Rise of Monsters will be coming to Kickstarter in all its savage glory on June 13, 2017! Soon it will be your time to crush your enemies, see them driven before you, and…eh, you know the rest!

Join Pinnacle at the ETU Tailgate Party at ChupacabraCon! 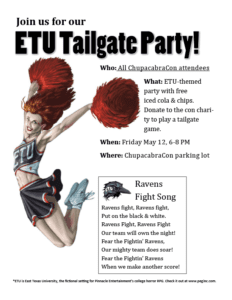 Even at East Texas University, college isn’t just about work and study—there’s a party or two thrown in there for good measure. We’re hosting an ETU tailgate party of our own, and you’re invited!

Join the Pinnacle crew Friday May 12, 6:00–8:00 pm, in the parking lot at ChupacabraCon for free drinks and chips until they’re gone. For a small donation to the con charity, you can challenge a Savage Worlds celeb to a tailgate game like washers, ladder toss, etc.

In true tailgate fashion, we’ll even have a round of the ETU Fight Song and share it online for all the study groups who couldn’t join us. Go Ravens!

The Mythic Gazetteer is proud to announce their upcoming Kickstarter for The Blackwood Errantry Codex. This new complete setting book contains a full Plot Point Campaign and all the information your group needs to journey into the Blackwood, where Grimm’s fairy tales, early North American folk tales, and high-flying wuxia action all come together! 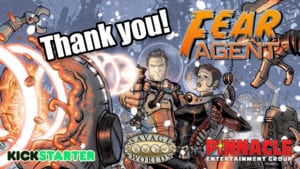 The Fear Agent™ for Savage Worlds Kickstarter has ended! Thank You, Everyone! With your support we’ve reached our goal and we’ve had a ton of fun along the way.

Things will quiet down here for 2–3 weeks while Kickstarter collects your pledges. In the meantime we will keep you updated as the final steps happen—keep an eye on the Fear Agent™ Kickstarter Updates page for news. Don’t worry, your group will be fighting Zerin Raiders, Dressite Soldiers, Tetaldian Invaders, and other aliens as soon as possible!

Thanks again, friends. We appreciate your support! 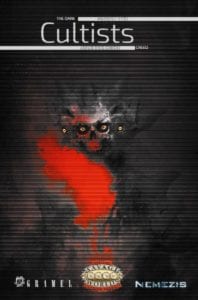 The Dark Creed: Cultists brings you the humans that plot against the main characters from the core rulebook—the cultists of the Dark Gods. Remember, people are fantastic at self-destruction. Don’t let them get you, too!

Deadlands Live on Twitch with Wildcards from Saving Throw 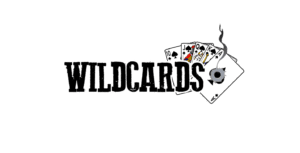 Our friends at Saving Throw are now running a live Deadlands game on their Twitch channel on Friday nights. It launched last Friday, and you can catch up on that first episode to be ready for this week!

Get ready for an exciting ride through the Weird West, and join them for Wildcards! on the Saving Throw Twitch channel every Friday night at 8:00 Pacific! 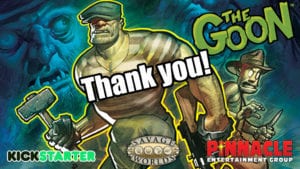 The Goon™ for Savage Worlds Kickstarter has ended! As always, our thanks go out to you. Not only do you make these things possible, you make them fun!

And do you have a lot of fun coming to you. You’ll get the “normal” goodies  like Miniatures, Bennies, GM’s Screen, new adventures, and more. Your backing enthusiasm unlocked Form-Fillable PDF Character Sheet, PDF Archetypes, Custom Combat Options Chart (both in PDF and print), Creature Cards, and Form-Fillable PDF Table Tents.

Don’t worry, though. You’ll be dealing with groanin’, brain-chomping zombies, swarms of chug-heads, Slackjaws, Bog Lurks, and other unpleasent creatures as soon as possible!

We couldn’t do these things without you, you know. And we definitely thank you for your help with The Goon™ Kickstarter and your continued support!

The Goon™ and Fear Agent™ Kickstarters Wrap Up Monday! 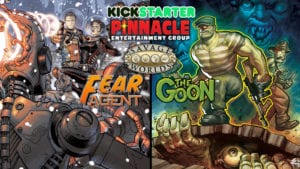 Check out this pair of Kickstarters today, before it’s too late!

Get More from The Goon™ for Savage Worlds Kickstarter! 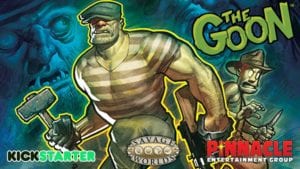 Oh, sure, there’s all sorts of stuff you can get from The Goon™ for Savage Worlds Kickstarter—books, PDFs, dice, minis, and more—but there’s also stuff YOU can make happen! That’s right, your pledge can get us to the Stretch Goals to make more. In a way, that makes you an author, right?*

We’re almost to another print reward, the Custom Combat Options Chart in print. The Creature Cards in print are right on his heels! If you’ve not backed the Kickstarter yet, join us and everyone gets more stuff! If you have, round up your friends, your neighbors, and maybe even your parole officer to get them on board.

Remember, you only have until Monday, April 17th at 5pm Eastern. Don’t wait too long…

* No, you will not receive an authorship credit. nice try.